Besides being a jewelry artist, Poppy Vincent is also a Contemporary Christian Vocalist. She has inspired, challenged, and entertained audiences for over forty years. Besides captivating young and old alike with her incredible voice. Audiences are intrigued by her use of American Sign Language. This powerful tool is not only beautiful, but makes a double impact of both sight and sound. Poppy is an award winning vocalist, who has had the privilege to open for such artists and groups as The Newsboys, Tony Vincent, John Schlitt, Michael O'Brien, and Rhythm & News.  This review in "Christian Happenings" magazine, was just one of many positive reviews!

Poppy has the confidence not only to sing about her faith, but also produce her own project, which sets her apart not only as an accomplished artist, but also a faithful steward seriously using her talents to further God's kingdom. This release is one which will endear her mission to many. Her strong, clear voice easily communicates the truth of the gospel supported by solid contemporary instrumental arrangements. "Gift of Love" is a personal testimonial reminding me that each of us has a story to tell. "The Judgment" showcases the elements of Poppy's style - profound lyrics delivered in a simple, straightforward style that let's the listener understand where she's coming from. "Deep Within" is a telling of busy lives that almost succeed except for the gnawing emptiness that God is missing. Poppy includes the great Larry Norman classic "I Wish We'd All Been Ready" a final invitation to choose Christ soon.

In response to the enormous amount of requests for tapes, Poppy has released her debut album, self-titled "POPPY," available on CD and cassette. This album is a compilation of songs in various genres that appeals to all ages. The album opens strongly with "Sea of Life," a modern pop song and is built upon by adult contemporary ballads, a soft rock sound, and introspective lyrics, such as the ones she wrote in "All He Wants." People moving here and there Making moves to hide their fears They didn't dance, they didn't sing They had no hope in anything, Then death was swallowed in victory Truth has come to set us free 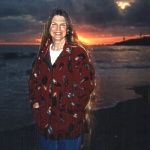