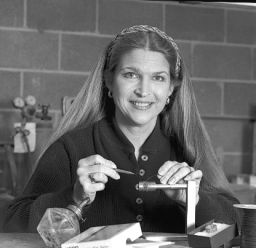 "It is the most lasting, most beautiful, and most enduring form of decoration-

Enamel work has been around for centuries in various cultures all over the world back to Greece in the Fourth Century B.C.  Although the technique is thousands of years old it seems to be the most misunderstood art medium.  This is probably due to the fact that we use the term “enamel” to mean everything from glossy paint to fingernail polish.  Vitreous enamel is the term artists use.  This means taking fine granules of glass and firing them onto a metal surface.  Usually this is done at around 1500 degrees either in a kiln or with a torch.

Vitreous glass enamel comes in a vast amount of colors that can be either opaque or transparent.  Clear enamel is called “flux” which is not to be confused with the flux used in soldering metal.  The size of the grains have various effects on color.  Copper and fine (pure) silver are the most common metals to enamel on, although other metals can be used such as steel which is how most of our appliances are finished in commercial enameling.

There are various techniques that can be utilized in enameling which create different effects and looks.  Here are some very basic explanations of some of the most common forms of enameling:

Sifting-  This is basicly just what it sounds like.  Dry enamel is put in a sifter and sifted over the surface of the metal.  Then it is fired onto the metal.  This is often the basis for other techniques to be applied.

Cloisonné-  This is probably the most well known technique.  The name comes from the French word “Cloison” which means cell.  Tiny wires of fine silver are formed to make designs or a picture on the surface of the metal.  These wires are fired or soldered down.  Then the cells are filled with various colors of wet enamel with either a tiny brush or tool.  They are then fired in a kiln at around 1500 degrees.  This is done for either seconds or minutes.  This could be done in one layer or even 20 depending on shading or other design factors.  Each layer has to be fired.

Plique-à-jour- Very similar to Cloisonné in the fact that the design is made up of cells of wire.  In this technique though there is no background metal.  This way the light is able to come through the enamel like a stain glass window.  This is probably the most complicated technique of all.

Champlevé- Enamel is fired into recessed areas of the metal.  Traditionally this was done by using the metalsmithing technique of chasing and repose.  This was done by hammering on the back side of the metal and using gravers to etch details on the front.
Today probably the most common way of using Champleve would be to acid etch a design and then fill the concave areas with enamel.  Sometimes only one transparent color is used in this technique.  The variations in the hues of the color are affected by the depth of the enamel.

Basse-Taille-This technique is very similar to Champleve in the fact that you are putting enamel in recessed areas of metal.  In this technique though the depth is very shallow and is etched or engraved which shows through the transparent enamel.

LIMOGES-This is actually painting with very finely ground enamel that is mixed with some type of oil.  Depending on your artistic skills this can be quite difficult.  Grisaille enamel uses only black and white enamel.

I have been very privileged to sit under some of the most famous enamelists in the world.  I have tried to glean from all of their individual styles and ways of working and make them my own.  I am very grateful to the following Enamel Artists for sharing their talents and expertise: